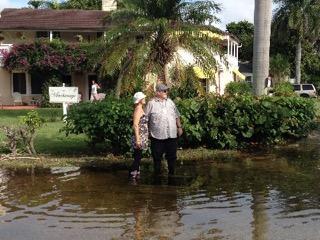 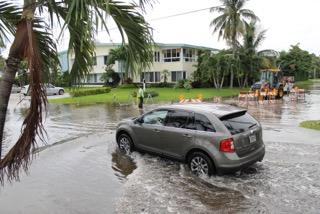 The City of Delray Beach has started efforts to increase the effectiveness of Intracoastal Waterway (ICWW) seawalls.  In recent years, problems have arisen in several neighborhoods on both east and west sides of the ICWW during king tide events, which occur in late summer and early fall. These higher than usual high tides have flooded streets and low elevation homes twice per day in areas such as the Marina District, sometimes for several consecutive days per month.

When the ICWW flood waters are higher than the street elevations for several hours, water flows onto city streets through the storm drains, which were designed to channel water away from streets and into the ICWW

Fortunately, the most recent king tide events occurred on days with clear weather and relatively calm winds.  However, heavy rain activity or sustained strong winds from the east would have made the flooding problems much worse, as additional rain runoff and more ocean water would have been forced into the ICWW.

To prevent this type of flooding, the City has already installed five back-flow preventers (one-way valves) that will only allow water to flow away from land and into the waterway.  These valves can only be effective if sea walls are properly maintained against leaks and the seawalls are raised over time as ocean levels continue to rise.

The City has contracted with the engineering firm, The Wantman Group, to design the repair of both the public seawalls and the dock at Veterans Park, and also increase their elevation The current work will elevate the seawalls by 1.5 feet, with a future elevation increase of another 1.5 feet. The design being considered is one that would allow future additional height add-on via stacking elements without a total rebuild.  The effectiveness of this work in protecting city neighborhoods in the future also depends on private property seawalls being properly maintained and elevated to similar heights.

In a separate but similar project nearby for next year, the city is planning a walkway and seawall parallel to Marine Way, just south of the Atlantic Street bridge on the west side of the ICWW.  This area currently does not have a seawall and is subject to flooding all year round during monthly high tides.  Also next year, the city will conduct an assessment of both public and private seawalls to determine their conditions and elevations.